On this coin of 1 Mark , the lion, king of the animals, symbol of Finland, incarnates the capacity, wisdom, and justice. He can also assimilates to vanity.

Series of penniaä ; Finland is one of the Scandinavian Countries 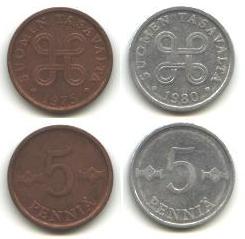 Finland tries since 1990 to recover territories yielded to Russia after 1944. The country tries to find an arrangement to pay to Russia the hiring of a port on the Arctic. Finland, contrary to Norway, does not have an access to the Arctic Ocean.