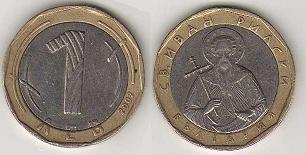 1 Lev. Saint Ivan Rilski (876 – c. 946) was the first Bulgarian hermit and the founder of the Rila Monastery.
He is today honoured as the patron of Bulgarian people and one of the most important saints of the Bulgarian Orthodox Church.

Bulgaria was founded into 681, it is one of the oldest countries of Europe. 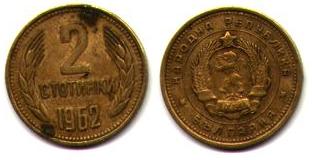 1 Stotinka (1999 -) and 10 Stotinki (1999 -) with the rider of Madara overcoming the lion. He symbolizes the greatest of Bulgaria, the figure comes from a sculture in rock at Choumen.

Back to European page - Main page