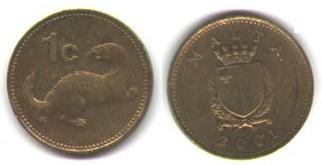 The coin depicts the Ballottra, or weasel, a nocturnal animal, which feeds on small animals such as frogs, rodents, lizards, nestlings and small rabbits. Copper and zinc

The coin shows a branch of the Zebbuga (or olive tree) a very long-living tree which grows up to 15 metres high with a broad crown and a thick trunk, sometimes a shrub. The tree is a typical Mediterranean kind of vegetation and lot of mediterranean states use olives and the olive oil (Italy, south of France, Croatia, Spain ...)

A fresh water crab ( il-Qobru), which is found in a few Mediterranean islands including Malta. It feeds on various organisms including frogs and tadpoles. 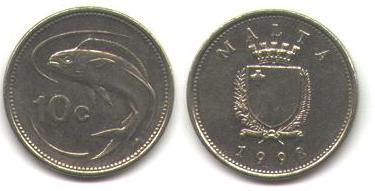 This coin shows the Lampuka, a fish traditionally popular with the Maltese and which is caught in large quantities in the surrounding sea.

The State of Malta is composed by5 islands : Malta (largest, Gozo and Comino as of two uninhabited islands) the Maltese islands have a strategic position in the Mediterranean. They were be invaded by Phoenicians, Greeks, Carthaginians and Romans (-220).

After the fall of the Roman Empire, the islands was invaded by the Vandals, Ostrogoths, then Byzantines (into 533), and by the Arabs into 870. and logically the Maltese language has Maghrebian Arab roots. The Arab conquest ended in 1091 when the islands of Malta were conquered by the Norman Roger Ier. The hospital ones of Saint-Jean-of-Jerusalem settled on the islands thanks to Charles Quint, and took the name of Knights Hospitaller (knights of Malta). The chevaliers of Malta exists still nowadays and the Maltese cross is its emblem. Malta became British in 1814 and independent in 1964.

Back to index Europe