After "the Large assault" (1779-1783) Spain tried to capture again the enclave with the British. The enclave is called "the rock".

Saint George (of Lydda) is a legendary saint. According to the legend this Roman officer, arrived in a city terrorized by a dragon and where the daughter of the king had been just made captive by the monster. With the assistance of Christ, it overcome the dragon and saved the daughter of the king. Saint George is the representation of the victory of the liver over the evil, one represents it with horse embanking the dragon, it is patron saint of England. 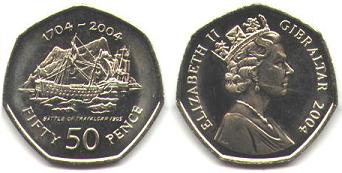 The naval battle of Trafalgar opposed on October 21, 1805 the Franco-Spanish fleet to the British fleet. The Nelson vice-admiral ordered the British a total victory (in spite of their numerical inferiority). Two thirds of the ships Franco-Spanish were destroyed. Since this battle, Napoleon abandaned to conquest the United Kingdom.

October 21 is celebrated in the United Kingdom under the name of Trafalgar Day.