1 kroon with Coat of arms

Estonia is one of the 3 Baltic States with Latvia and Lithuania. Tallinn is its capital (430 000 inhabitants). The name of the city has like origin Taani linn: "Danish city" : In 1219, the city was invaded by the Danish troops. They built a fortress there hones of it www.tallinn.ee

Estonia (in 1992) engages European advisers (British company Interbrand) and invest 5 million dollars. Its goal : to be better know in the world. Thereafter, Erik Niiles Krose (chief of the secret service) proposes to Estonia to begin a new country with new symbols. From the proximity of Finland (geographically and linguistically), he proposes a new flag with a Scandinavian cross showing the membership of the community of the Scandinavian countries, (Recall that the Baltic States term applies really only to the two other countries : Latvia and Lithuania), and a new name: Estland. It is true that the country has various origins which divide it between its Slavic and Scandinavian neighbors: language finno-ourienne and no Indo-European, but of orthodoxe religion...Estonia is between scandinavia and Russia. 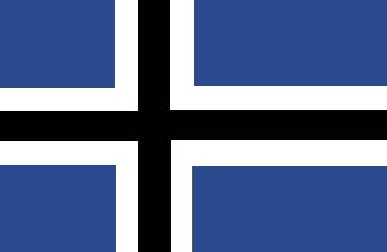