banknote of 1000 won. School Confucianist (a religion of the country) of Dosan with Andong (Gyeongsangbukdo) and the scientist Yi Hwang. 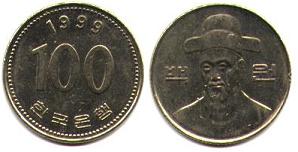 10 won with Pagoda of Dabotap

500 won. Gruidae is a bird of the family of the cranes ; symbol of grace and beauty.  échange avec Patrick R.

The division of Korea started after the Japanese occupation (1905). At the end of the Second World war, in 1945, Korea was divided into two zones by the United States and the USSR. In June 1950 the War of Korea started. The South was supported by the United States, The North by China and the USSR. The agreement of cease-fire of Panmunjom signed in 1953 put an end to the combat but not at the war, which nowadays still is not officially finished.