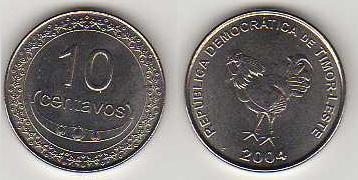 10 centavos. Youngest official country of the world : the constitution was signed April 14, 2002.
1885 Timor is divided between Portugal and the Neederland. After the Portuguese revolution, Eastern Timor acquire its independence.
After a civil war Indonesia annexed the country. After the referendum of 1999 deciding for the independence of the country ; Indonesia destroyed 80% of Timorese infrastructures.
UNO taken then under its wing institutions of the country until 2002. Of large sources of gas and oil will be able to soon bring prosperity in this new State.