1 centavo. In the higher part of the blazon, a gold key floats on the blue sea between two mountains : this key symbolizes the position of the island between two Americas.
The raising sun represents the emergence of a new State. The blue and white bands of the left part symbolize the division of the island during the colonial time.
In the right part, a cuban landscape dominated by the royal palm tree, symbol of the irreducibility of the cuban people.

10 centavos with the castle of La Fuerza (Castillo de la Fuerza) La Havana, it was built in 1565. 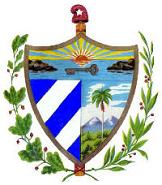