On the face the fish is probably Exocoetidae called usually flying fish.

On the reverse : Coat of arms of the country with a gold shield. On the shield it there are the flowers of Barbados and a bearded fig tree (ficus Citrifolia).
They were common on the island to the moment of the adoption of the symbol. The shield is held by : a dolphin on the right. It's symbolic system fishing industry and justice.
And on the left side (sinister) a pelican (in reference to the island called Pelican Island which takes part in the economic development thanks to its port).

Above the shield, there are a helmet and a garland with the arm. And the hand of a bardadian holding two pieces sugarcane (in reference to this industry on the island).
It form a cross of saltire, the cross on which Saint Andrew was crucified. The day of independence in Barbados is celebrated on November 30, day of the Andrews Saint.

The motto indicates: "pride and industry." 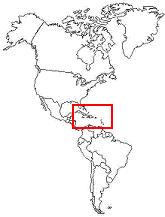