On the pretext of a slight to their consul, the French invaded Algiers in 1830. The result is that Algeria was divaded in 3 prefecture, Algeria became a part of France. 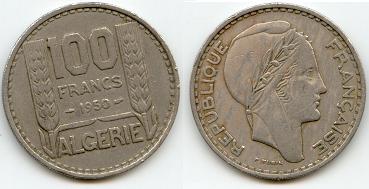 Algerian coins and French coins was the same until then 1943

5 centimes of 1964 with coat of arms : we recognize the crescent and star like on the flag

5 centimes de 1989 with a wheel and sheaves of wheat, symbols of industry and agriculture.

Algeria becomes independent in 1962 after 8 years of war.

5 dinars of 1974. 20 years of the begining of the independace war against France. 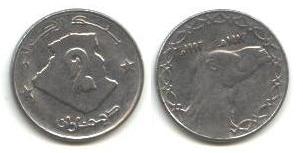 Algerian Map with a buffalo and a dromedary

Back to page Africa - Main page